If You Love your Freedom, Thank a Veteran 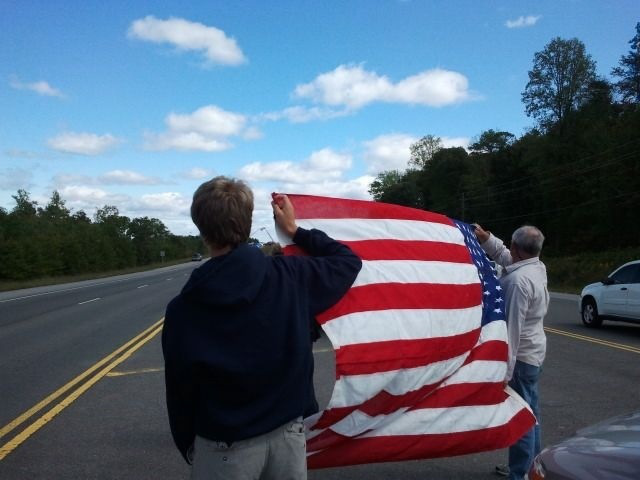 *This post was written a couple years ago in an earlier incarnation of this blog, but it’s as timely today as it was then. For me, even more so, now that one of my sons is serving overseas.  It’s also my sister-in-law’s and cousin’s birthday today, so Happy Birthday, and God Bless the fine men and women who have served and continue to serve the United States!

Last month, in our small little county, in a rural patch of Appalachia, a soldier came home.

He came home to a hero’s welcome. Crowds lined both sides of a 40 mile stretch of the highway from the airport to town. Banners were hung from businesses, people were dressed in red, white and blue, waving flags both large and small.  I get teary-eyed – still – thinking about this display of respect strangers had for their hometown hero.

I’ve never seen such an overt display of patriotism in my life. Not even on the Fourth of July. Sometimes, I think, much like Christmas, the importance and meaning of Independence Day or Veterans’ Day is lost on most people. I confess, I’ve often  passed it off as just another day without mail service or the banks are closed.

Let’s face it, we don’t celebrate this holiday with parades much anymore. Scores of WWII and Korean War veterans are no longer living. Vietnam vets still harbor bad feelings about that war and their perception of the support for their service. Many veterans of the Gulf War, as well as the War on Terror, are just busy making a living, raising families, and even still serving. Most years, because if there are Veterans’ Day ceremonies, they aren’t publicized in many places beyond the VFW hall, it plays out as just another day.

Several years ago, I saw “Saving Private Ryan” in the theater and it truly changed the way I viewed at Veterans’ Day. My grandfather fought in the European theater during WWII and while he wasn’t part of the Normandy Invasion, I’m certain he saw things no one should have to see. The movie opened my eyes to the realities and sacrifices of war. I felt differently about those who served. And I felt differently about the cost of freedom.

But nothing brought it home like that day last month when a soldier came home.

I saw with my own eyes what freedom is really about. I saw that not everyone who fights for my rights and privileges as an American comes home to their loved ones. And even though I didn’t personally know Frankie – although I know many that did – it hurt.  It hurts still.  I know that  others along the parade route felt it in their gut too…  That feeling of loss for someone so young and brave and dedicated to protecting his country.  A feeling that we should have expressed our gratitude and pride before it was too late.

So I can’t even imagine the pain and grief the families, friends and the brothers-in-arms must feel when they lose a loved one in combat.

It must hurt too, when a soldier who put his or her life on the line, maybe lost a buddy or two, or perhaps lost eyesight or a limb, comes home without that hero’s welcome.

Because they most assuredly deserve it.

From the bottom of my heart, thank you to all who have ever served or are serving your country. What you do matters…. more than you will ever know.

May God Bless You for your sacrifices and dedication each and every day. I hope you all had a wonderful 4th of July holiday!  We’ve gone to the same place to see fireworks for the past 10 years or so, and we thought we’d have to cancel this year because we’ve had nothing but RAIN for the last […]

Give Someone a Hug Today

This is our 2nd son.  He’s in the Air Force overseas, and this picture was taken last May before he shipped out to his first duty station.  He’ll be deploying to “the sandbox” a month from today. For OPSEC purposes, that’s all that can be […]