Unfortunately, even though it’s a “superfood,” I haven’t been a huge fan of kale. I should love it beyond beyond because I’m almost always anemic, and dark, leafy greens are a great source of iron, but I think it’s on the bitter side. As someone who came to enjoy brusselsprouts late in life exactly because of their bitterness, I honestly don’t see what all the fuss is about. I do buy it, because my daughter (silly girl) eats it raw and straight out of the bag like it was a bag of Cool Ranch Doritos instead. But then, she prefers her broccoli raw and requests it that way whenever I’m cooking it as a side dish. I, on the other hand, mostly use kale in smoothies where the taste can be masked by ginger, lemons, bananas and such.

So for me, eating. let alone actually craving this kale salad is almost as much of a thing as the day I called my mother and declared that I ate – and now liked! – brusselsprouts. (The thing with brusselsprouts is that I’d always eaten them frozen, but I’d tried fresh ones that were roasted, and fresh always makes a difference in my book!)

Of course I found out about this salad from my daughter, who told me that it was the be-all and end-all of kale salads. She gave me the one crucial piece of advice that made all the difference in the world to me actually liking kale as kale. It’s this: you must caress the kale. Yes, caress, dahling. Massage the dressing into the leaves (or are they stalks?). Then, let it sit for a short time to bathe the kale leaves. Just like lemon juice or other acidic fruits “cook” seafood in a ceviche, the lemon and salt work to soften the leaves and reduce some of the bitterness. Also, when I first saw the amount of lemon juice and olive oil for one bunch of kale, I thought it wouldn’t be nearly enough to mask the harsh taste, but because you knead the dressing into all those lovely nooks and crannies and ruffles of the leaves, it’s plenty. It coats every little bit just fine.

By the way, if you have a Trader Joe’s by you, they sell pre-cut, pre-washed kale in a bag for about $2. It’s the right size for this too. In fact, I pretty much now always have this salad pre-made and stored in my fridge to eat for lunch when I’m working or for dinner – with chicken – if my husband’s traveling for business. (For my anemia you know, wink wink.) That’s something really wonderful about kale; unlike lettuce that becomes un-crisp and soggy, kale that has dressing on it retains its basic structure without getting all wilted. So this is something you can make up and eat for two or three or maybe even four days. And I like those kinds of foods where I don’t have to go through all the prep work each and every day. Although, I would wait to add cheese and all the extra goodies until it’s ready to be served. I’m fairly certain the avocado would go mushy as would the cheese.

There’s something about the lemony, slight saltiness that makes the bitter kale just the right kind of bitter (I’m hearing Goldilocks in my head saying, “Papa Bear’s kale was too bitter, Mama Bear’s kale was a little bitter, but Baby Bear’s kale was just right!” Weird, that my brain can somehow summon up a fairy tale when I’m discussing salads.). Throw in the sweetness of the Honeycrisp apple, the toasted almonds, the cheese, and maybe some creamy avocado, and this salad is, as my daughter has been known to say, “Amazeballs!”

Who knows?  Maybe this salad is my gateway drug into the wonderful world of kale.  It always seems to me that if prepared properly, it takes just one time eating a food you dislike to somehow change your mind.  (Although, it still hasn’t happened for me with mushrooms….)  But just maybe kale chips are on my horizon…. 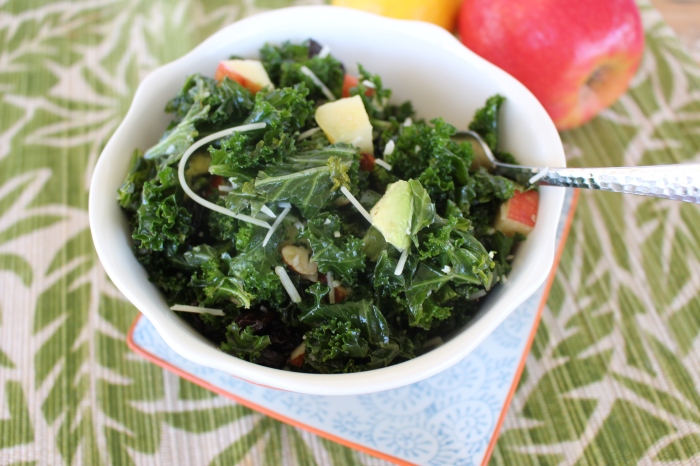 *Since Honeycrisp are primarily an autumn treat (although I’m seeing them in stores longer and longer) and may not be available, substitution of another apple might be necessary.  Some possibilities are Granny Smith, Jazz, Pink Lady, Fuji or Ambrosia.

Whisk together the lemon juice, olive oil and 1/4 teaspoon salt in a large bowl. Add the kale, mix with your hands to coat and let stand at least 10 minutes but up to a half hour.

While the kale stands, chop the apple into matchsticks. Roughly chop the almonds and place on a paper plate.  Put the paper plate in the microwave and cook on high in 30 second increments, lightly tossing each time.  When they just start to turn a little golden and smell nutty, they’re done!  After the kale has “marinated” for a time, add the cherries or Craisins, apples, almonds and cheese. If desired, toss in avocado and/or chicken.  Season with additional salt and pepper and toss well.  Eat and be healthy!

Every year my favorite grocery chain has Black Mission and/or Brown Turkey figs BOGO (buy one get one free) and I can never help myself from buying a couple containers of them. Dried figs are one thing; fresh figs are immeasurably better.  The problem is […]

How to Kick Up a Basic Viniagrette

When I can, I grow various lettuces in my garden, and when it’s too hot or cold to grow any, I go to Costco or Sam’s and buy them in bulk. Yeah, I’m the weirdo buying the shoebox size container of spinach and the 6-pack of romaine. […]