How to Deal with Endings 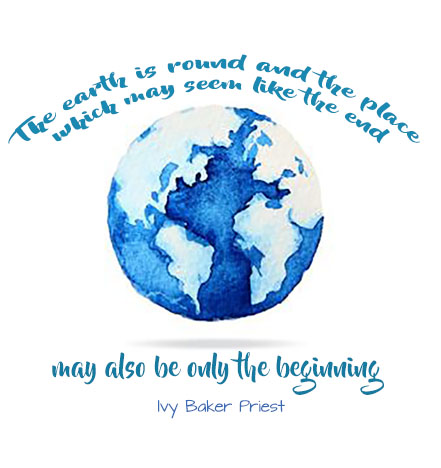 A few years ago, a family that we spent a lot of time with through homeschooling had to move out of state.  They were pretty well entrenched in the community, their church, and the list of people that were sad to see them go was long.  But no one was as sad to see them leave as they themselves were.

Early in their marriage, they’d moved quite a lot for one job or another.  But after they had kids, they let their roots sink deep down and spread wide.  They wanted their children to have a sense of belonging and to know that there many, many others who loved them well too. So when they had to move, well, it was with a very heavy heart.

Sometimes you have to make choices that fly in the face of everything that seems good and right.

There was a large going-away party for them, and we were asked to put one of our favorite quotes or Bible verses in a scrapbook for them to take to their new home.  The quote:

The world is round and the place which may seem like the end may also be only the beginning.

was the one I added, and in truth, I’d never seen it before (thank you so much Quote Garden!), but it seemed rather apropos.

It’s been something I go back to again and again because, as we get older, so many things often run their course.

Being able stay up as late as you want and then function normally the next morning.

Even things you think will never end, do:

Buying 3+ gallons of milk a week when there are teenage boys in the house.

Wanting a “big enough” house and all the stuff to go in it.

The point is, we’re limited by only seeing the past and the present.  Things we think will never end, eventually do. And the things we hope won’t, come to an end anyway.

Being creatures that like comfort and safety, we often hold on to what we know, even if it’s making us miserable.  I mean, how many of us have ever done something because it seemed like “the responsible thing to do”?

Stayed in a job that you hated going to every. single. day. because it put food on the table even though you secretly wished your boss would show up in an episode of “Without a Trace”? Went to school for a degree that wasn’t anything you were good at because it made more economic sense in the long run?  Had a bigger helping of green beans at Thanksgiving instead of eating another helping of what you really wanted – stuffing – because it was the healthier option?

I’m not saying that these aren’t things you shouldn’t do, but there are always seasons to everything and sometimes it’s easy to miss the beginning of a new one because we’re rooted in the last season.

There’s absolutely nothing wrong with working in a job to put food on the table.  At what point do you put your family first in an entirely different way though?  When do you start living your best life by using your gifts and talents in a job that is purposeful for you rather than staying in one where you show up everyday just because showing up is the grown-up way?

The other day after my daughter picked me up at the airport, we went rock-climbing at one of those indoor places. If you’ve never done it before, it’s one thing to shimmy up to the top of the wall. You feel like a kid again climbing the apple tree in your childhood backyard. It’s an entirely, definitely, positively, completely, absolutely, different thing to let go and trust that the belay rope will keep you from plummeting to your death.  You want to hold on to the wall, even though it’s uncomfortable, because that wall is solid.  You want to hold on to the wall because it’s there.

The only thing between you at the top and the hard hard floor is… well, air.  And you can’t hold onto air.

A lot of the time we treat things that are ending – both good ones and bad ones – like that rock wall.  We hold on because those things are just….there.  They may not serve a purpose any longer, but we want to clutch them to our chest like we’re running from a burning house with our most important possessions.  Instead, we’re really squeezing tightly onto an ideal of what we think is supposed to be, or instead, we’re remembering it as better than it genuinely was.

We’re not holding onto reality anymore, because possessing that little control we think we have in the situation, seems easier than let go.

So how exactly do you let go of that “thing,” when every instinct tells you to clasp it more tightly?

For my friends that moved out of town, it turned out to be a really great beginning for them.  They met all sorts of incredible people, had tremendous job opportunities, and learned to love and appreciate their new home in ways they would never have fathomed before.  Their answer?

It’s impossible to move backwards, so you really have no choice but to move forward.

Take that first step, and then the second, third, fourth and beyond will get easier.

I’m not saying I have it all figured out, because there are most assuredly things in my life that I want to hold onto even though I know I shouldn’t.  I’m still holding onto dreams that I thought would make my life, if not perfect, then definitely better.

But… there is no perfect. And sometimes there’s no “better” for a reason either.

Once I get it in my thick head that there is no perfection in regard to these things apart from God, I’m able to take that first step forward. But it’s a lesson I have to keep relearning. Thank goodness, there’s grace in the lesson.